Modern-day .NET applications must be well equipped to cope with the ongoing scalability demands. These demands might be due to the explosion of ASP.NET web applications reaching millions of users, WCF web services applications handling Internet of Things (IoT) devices, and Big Data analytics applications processing huge amounts of data. Scalability here means to maintain the same high performance under extremely heavy loads that you see with no load.

The architectures of these .NET applications are very scalable because you can add more app servers as you need higher transaction loads. However, the problem is with data storage, especially relational databases like SQL Server, Oracle, and mainframe which are unable to scale in the same manner as the application tier.

Is Migrating to NoSQL a Right Strategy?

So, what is the answer to this problem? It is to continue using a relational database but with another type of NoSQL which is called In-Memory NoSQL store. Although, the name sounds very similar to NoSQL databases, however in reality is different. In-Memory NoSQL store is also called distributed cache or In-Memory Data Grid.

In-Memory NoSQL store does not persist any data on the disk for permanent storage. It keeps it in memory and is, therefore, is good only as a temporary store. As a result, it is not meant to replace relational databases that NoSQL databases claim to do. Instead, it is intended to be used “along with” relational databases and helps reduce pressure so they’re no longer a scalability bottleneck.

NCache as an In-Memory NoSQL Store

In-Memory NoSQL stores like NCache can be used for caching data coming from relational databases so you can reduce database traffic. It can also be used to store transient data (temporary data) created at runtime for a short period. One example of transient data is ASP.NET Session State storage in a load-balanced web farm deployment. 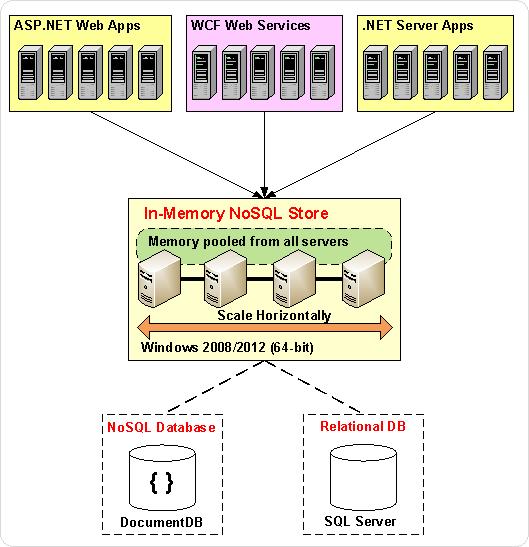