NCache - Five Steps to Getting Started

This short video explains in five steps how to set up and use NCache. NCache is an Open Source in Memory Distributed Cache for .NET. It improves your application performance and scalability. So, the five steps are:

So, let's start with the first step of NCache software setup. If your application is running in an on-premises situation, then you need to download NCache from our website. If you come to our website, you can go to the download page. I strongly recommend that you download NCache Enterprise Edition, because it has all the features that you might find useful, even if you end up using the open source edition later on.

The client portion of NCache you can install either through a Windows Installer, or if you can use a NuGet package then you can come to our NuGet site and you'll see that there are a bunch of NuGet packages. For all of the API calling you use the NCache.SDK. For the session services for ASP.NET Core you use this NuGet package, for session state provider for ASP.NET you'd use this package.

The hardware that is required to run NCache servers is typically an 8 to 16 core CPU server, although you can take the number of cores higher if you have a larger transaction load. And then the typical RAM configuration is 16 to 32 Gig. But again, as I said, you can increase the RAM based on your needs and you need at least of 1 to 10 gigabit network card. NCache runs on both Windows Server and Linux and again I'm talking about the both the cache server and the client.

On Windows, NCache can run either as .NET or .NET Core, on either Windows 2019, 2016 or 2012 R2. And of course on Linux, NCache can run only in the .NET Core configuration. You can also combine Windows server based cache servers with clients that are either on Windows or Linux and vice versa. But the cache servers themselves should be ideally on the same operating system.

Before I get started, let me quickly tell you how NCache is normally deployed in an enterprise. You would build a cache cluster of minimum of two cache servers. This is a TCP-based cache cluster but you can add more servers as you need. The minimum of two is for redundancy purposes and then after that you maintain a 4:1 or a 5:1 between the application tier and the caching tier. 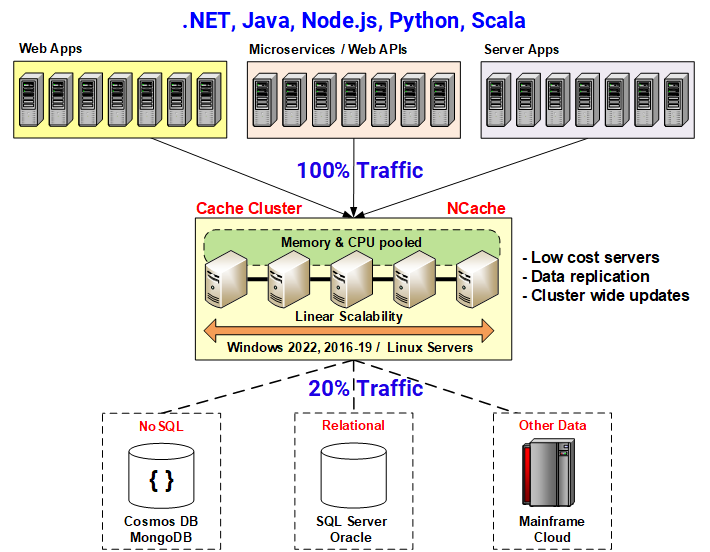 That's based on our best practices and to get the maximum performance from your application. NCache pools the resources of all these cache servers into one logical capacity and if you add a third or fourth server then obviously your capacity increases.

NCache has multiple caching topologies but I'm going to use the partition replicas topology, because it's the most popular topology. It provides you linear scalability because of partitioning and also a reliability of data through replication. In this topology, every partition is backed up onto a different server, so if any one server goes down you don't lose any data.

So, let's go ahead and create a cache cluster. I have a bunch of machines here. I'm going to actually use a two server cluster initially. So, let me go ahead here and go to the NCache program group and I will run this NCache web manager. It's a web-based management tool of NCache.

Ok, now that I've created the cache cluster, my next step is to configure the cache clients. So, I'm going to go here. I'll go to the details of this cache cluster. I will come to the, I'll say, add a client node. So my clients are two of them, one is this computer that I'm logged into, which is what it's showing up here. So I'm going to add that and the second client is a Linux box. So as I said I could mix and match Windows and Linux clients. So if your application is running on Linux you can also use that the same cache from that application. So I've also now configured the cache clients.

Now let's go to this next step, which is test the whole thing, test the cache cluster and make sure that the clients are able to talk to the cache. So, I'm going to come here and I will highlight this and I'll say start the cache.

So once the cache is started, I can then start monitoring it and I will also start to run a test application. I have this, NCache comes with this tool called stress test tool. It's a PowerShell Cmdlet, so I'm going to say monitor first, so as you can see I have got this dashboard style that I can monitor, I can also monitor it in a report style. I'm going to go ahead and start a PowerShell command prompt here and I will run this program called stress test. Now we'll give it a cache name. This is the same cache name that I created right here as you can see, right here. So I'm going to hit Enter and this program now connects to this cluster and you'll see it'll start to appear here, right here.

So I've got the .82 which is this machine, it's a Windows machine. I've got that client talking to the cache cluster. I can see it here also that the cache activity has just started. I've got one client connected, so this client talks to both of the cache servers and I can see all of that.

So now I'm going to go ahead and I have a Linux machine that I'm logged into, as you can see, so I'm going to do PowerShell here and after I've started the PowerShell. In case of Linux I have to import this module. I will just copy this, I'll paste it here. Now that I've imported the NCache module in PowerShell, I will go ahead and say run that same program here. So it's going to also now start to talk to this cache cluster. So now I have two clients, as you can see here two clients that are talking to the cache cluster both of them are talking to all the cache servers. I can see it here also. Their activity has gone up and I've got two clients here. I can also see the client side counters in terms of the activities and I can see it also here.

So, this is how you would normally use NCache. It's that straightforward but now let's assume that now you're adding more and more stress on your cache servers and the two cache servers are starting to max out. Although it's not happening right here but let's assume that's the case. So I want to show you how you can add a third cache server at run time. So again everything is running, both the clients are still running, I'm going to come here and I will get the IP address of the third cache server, which is right here, and I'm going to say add another server node. I will add this server node here and it just added a third server to the cluster but this has not been started yet so I'm going to come here and I will say start this third server also.

Once this server starts, you'll see that it's going to start to show activity here. So it’s right here, it's going to start to show activity right here. So see now it’s got three servers, 102, 121 and 122. And again the clients are continuing to run without any interruption, even though you just added a third node. You could do the same by just dropping a node and it's going to work fine the same way. In fact, let me just quickly do that. I'm going to come here and I'm saying I don't need the third node anymore, I will just come here and say stop. So if I do stop, you'll see that this is going to drop the third node but everything is going to continue working as if nothing happened.

And that's the high availability part of NCache that you can do that at run time you can scale it up or down, by adding more servers or dropping servers from the, as you can see it's still stopping there it is, so that server is gone. And as you can see, the applications continue to work. So that should give you a pretty good idea of how to test, to make sure the cache cluster is working.

Use Cache in Application (Common Uses of NCache)

So those are the four use cases of using NCache that you have please contact our tech support team and schedule a live demo of NCache or watch other videos available on our website. Thank you very much.