Most applications that come into play have more or less the same architecture having a front-end, a middle layer and a back-end. The communication can be of several types such as browser communicating with the web APIs and web APIs communicating with other web APIs on the behalf of the users and so on.

Authentication and authorization between applications might require additional handling when talking to each other. It is hardly maintainable since any change in the API usage would translate to changes in the logic involved with authorized access and this becomes a testing and deployment bottleneck especially where microservices are involved. Hence comes the Security Token Service that is responsible for issuing tokens and validating claims that resolves the issue of scoped access to resources. All the authentication and authorization logic distributed among the different components of the application would then be offloaded to a central repository which is the STS.

This is great news for application maintenance as any change in the security architecture would then be applied in the STS without having to change the components dependent on the STS to meet security needs. IdentityServer4 is a frequently used STS in .NET Core applications that implements the OpenID connect and OAuth 2.0 protocols.

Let us look at the diagram below to get the overall idea of the security token service being used. 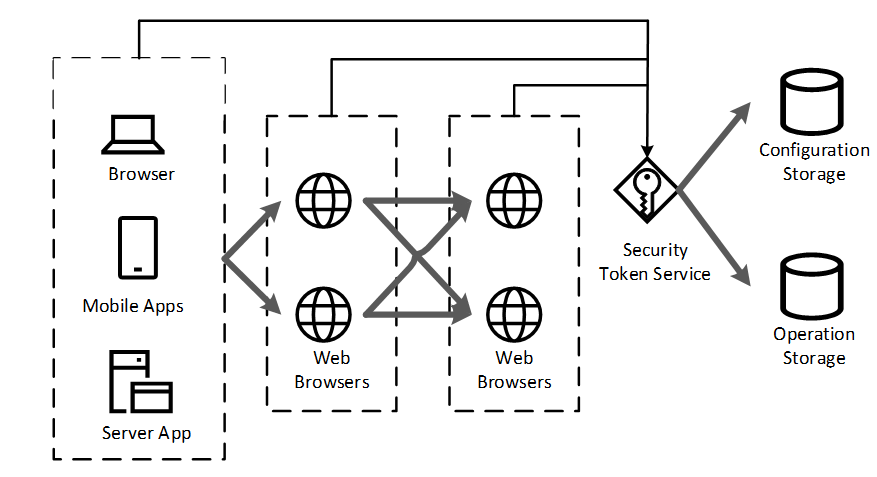 NCache, being a distributed, scalable in-memory key-value (KV) store, is a great fit in this scenario for the following reasons:

You can also mix and match the cache and store roles of NCache e.g use it as a caching layer for configuration store and as a standalone store for operational data. All this is implemented using the IIdentityServerBuilder NCache extension methods used during ASP.NET Core dependency injection.

The upside of it is that you can have your data store in-memory which yields better and faster outcomes. Let us slowly sink into the detail of how it is done but there are a few prerequisites to be taken care of before getting started.

Using NCache as the IdentityServer store means storing the information about the clients, API resources, identity resources etc. (configurations) and/or persisted grants and device flow codes etc. (operations). You are given the choice of using NCache as both the stores or as one. Given below is the diagrammatical representation of the possible options.

Now let us see where NCache fits in the picture: 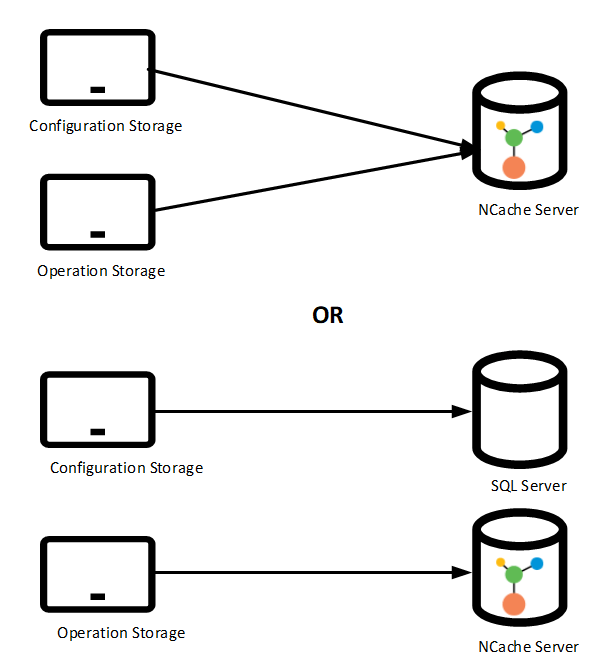 In order to use NCache for the configuration and operational data:

Step 1: In the cs of your project, add the .UseStartup<StartupNCache>() method and add the following code in the StartupNcache.cs file.

Step 2: In the appsettings.json file, modify the value of the CacheId key to the name of the cache you are using. Furthermore, for the multiple Servers keys, use a comma separated list of one or more IP addresses belonging to the NCache servers making up the NCache cluster.

NCache’s core functionality is to cache the data persisting in your data source for faster access and better performance. While you can use NCache as your data store, you can also use NCache between your data store and the application by caching the configuration and/or the operational data in NCache while also keeping it in the data store.

Let the figure demonstrate how NCache works as a cache with IdentityServer4. 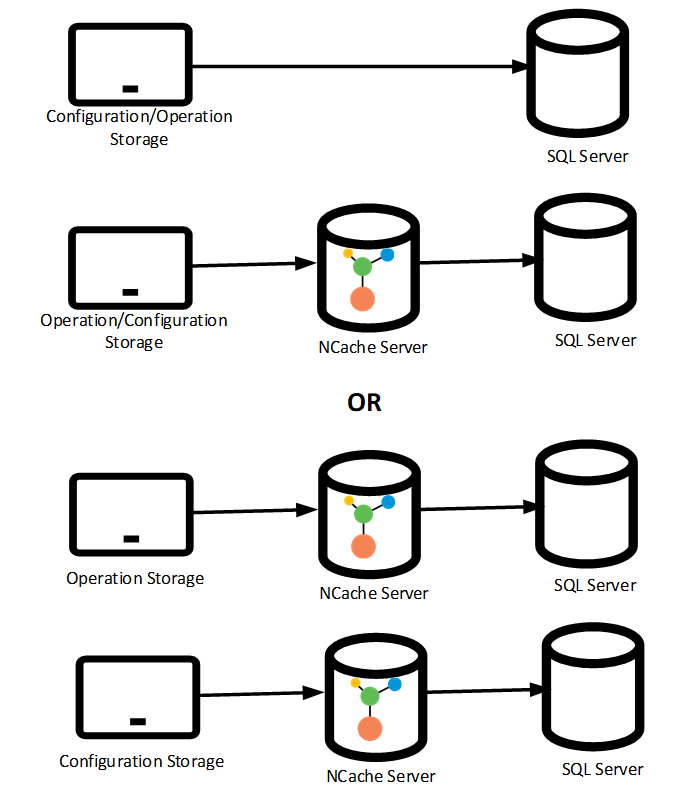 Step 1: In order to implement NCache as a configuration store while also persisting the configuration and operational data in the data store, add  .UseStartup<StartupEFCore>() method and add the following code in the StartupEFCore.cs file.

Step 2: In the appsettings.json file, modify the value of the CacheId key to the name of the cache you will be using. Furthermore, for the multiple Servers keys, use a comma separated list of one or more IP addresses belonging to the NCache servers making up the NCache cluster. Also, provide the connection string of the SQL Server.

Step 3: Run applications IdentityServer, MvcClient, Api, JavaScriptClient to see how NCache operates as a caching mechanism for the configuration store, the persisted grant store as well as the IProfileService default implementation. Make sure that the cache used as a configuration store and persisted grant store cache is running and can be connected to the IdentityServer sample application.

To sum it all up, IdentityServer does all the necessary authentication at each network hop in your application and NCache fits nicely to keep the configuration and operation data for faster access. Not just that NCache can also be used as your data store and store both kinds of data in-memory giving you the freedom of ridding your application of any other data source. You get all this by using the extension methods provided by NCache very easily.

Brad is proficient in a number of technologies including .NET, Java, C++, Python, and JavaScript and has leveraged this knowledge in applying software design to simulate Engineering solutions during his career. Brad has many years of energy industry experience delivering time-critical solutions and quality assurance activities in conjunction with customer representatives.

Backup and Restore your Data with NCache
December 15, 2020