Let’s say you pay at a mart using your card. Now you are at home, haven’t gone out in a while and you receive a message from your bank stating you have debited $20000. How? What you purchased cost you a mere $120! This will entail a long process of verifications with your bank, and the bank may take months in tracing and resolving the fraudulent transaction.

It would be much easier if a fraud detection mechanism is incorporated in the system so that it determines invalid transactions and fails them in real-time. However, this decision has to be instant and the system should train itself continually based on the user’s past behaviors. Hence, you can’t expect customers to wait at the counter while your fraud detection system takes time in detecting any anomaly. You need to have an efficient as well as faster system. This is possible if you store the data in-memory using a cache such as NCache and process it within milliseconds. 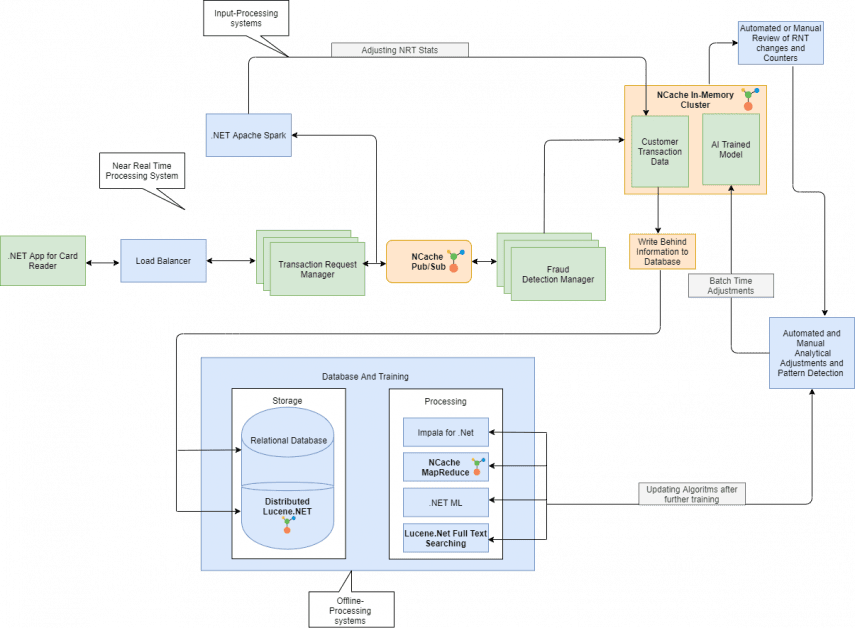 NCache is an in-memory distributed cache that offers powerful Pub/Sub messaging and other features such as distributed data structures. Keeping in view the systems involved in a fraud detection system, NCache seamlessly fits in the Near-Real-Time System as it requires blazing fast results. This is possible as NCache can be used for communication between multiple elements as well as storing data nearest to your application, further reducing network calls to fetch data.

We have created a sample fraud detection system in .NET that includes NCache to improve performance and throughput. You can find the working sample here at GitHub.

At an upper level, the application works as such:

The Fraud Detector contains complete logic for verifying if a transaction is valid or not. It behaves like a handler for performing all transactions and establishing a connection with the cache storage. The Fraud Detection Manager is initialized by creating a topic in NCache and subscribing to this topic. The callback for the Fraud Detection Manager topic exists in the Transaction Request Manager logic as it sends the results of the fraud detection logic back to the Transaction Request Manager.

In Fraud detection logic, first, a customer data is fetched from memory, if it is present there, we verify if any last in-memory transaction was fraudulent, if yes, then we declare this transaction as a failure too. If no such information is received, and all in-memory transactions are valid then we perform the already learned logic on this data.

In this learned logic, we use multiple factors to determine the validity of the transaction. We check if a transaction has originated from a valid IPAddress and a valid email address that lies in a proper domain. Moreover, the email shouldn’t exist in a range of suspicious emails. It is also checked if the transaction originated from any suspicious location. If any of the above criteria fails, the failure weight is incremented. If the failure weight is greater than the decision weight, the transaction as invalid. You can find the code for this logic at GitHub.

Caching Results and Persist them to Database

Once the result has been declared, the result is added/updated in the cache.

Once cached, a new message is created from this result and published back on the topic subscribed by the Transaction Request Manager. It receives the message and publishes the result back to the client application.

NCache is a distributed in-memory .NET cache that comes with multiple features like Pub/Sub, distributed data structures, data source providers and more. The purpose of storing and processing data in local memory is eliminating the cost of network transfer, as all processing is done through the cache, and results are later updated on the database.

An Insight into Using Pub/Sub Messaging with NCache
September 30, 2022