An Insight into Using Client Cache with Distributed Caching

Before we jump into the Client Cache, let’s zoom out a bit and understand the basics of caching. In computing, a cache is a high-speed memory used as an auxiliary store to avoid expensive data trips and optimize the performance of simpler applications that run on a single server node. But in a load-balanced distributed system, a single request is handled by multiple application nodes. This is where the cache causes a performance drop.

To tackle this exigency, an in-memory distributed cache is introduced for applications that cater to extreme transaction loads per second and require high availability and linear scalability.

Developers can choose from many popular distributed caching options available in the market such as NCache. NCache is an extremely fast and linearly scalable in-memory distributed cache that caches application data to reduce expensive database trips and improve response time. But despite all this, there is still room for a performance boost that can be made possible by adding a cache on top of a cache –a Client Cache.

How does Client Cache work in NCache?

In most cases, a distributed cache is hosted on a set of dedicated cache servers across the network, so your application has to make network trips to fetch data. And this is not as fast as accessing data locally and from within the application process.

In NCache, using Client Cache is quite simple. No code changes are required at the application end. It is a simple configuration option. You can create a Client Cache through the NCache Web Manager or the NCache-supported PowerShell cmdlets. Once the client has been configured, client applications will automatically start using it.

Let’s understand the working of Client Cache (also called first-level or L1 Cache) with an example of an E-Commerce application. The application frequently accesses the product catalog and data of currently active users. Such data can be kept in the Client Cache, running on the client box (where the application resides). So that a network trip across the clustered cache (also called second-level or L2 Cache) can be avoided and data is provided from the L1 Cache much faster. 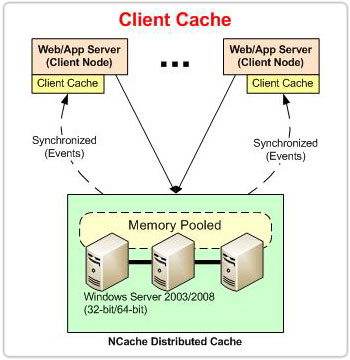 Now you must be thinking about how data is synchronized between two caches so that the application is always served with updated data from the L1 Cache.

Data synchronization between the L1 and L2 Cache

This is a fallback mechanism that gets triggered only when the communication between L1 and L2 Cache is stopped due to a network glitch or a connection loss. In this case, L1 Cache waits for 10 seconds and then polls itself and requests the data changes in the L2 Cache. Upon receiving the change notifications, it synchronizes itself with the L2 cache.

To fully reap the benefits of Client Cache, you can use it in either of the two process-level isolation modes available.

Isolation modes in the Client Cache

Client Cache runs on the client node where your applications are running. Depending on your performance needs and the application architecture, you can choose one of the following process-level isolation modes supported by the Client Cache. NCache Client Cache exists in two modes: InProc and OutProc.

In InProc mode, data among other application instances are not shared, so each instance of the application hosts a dedicated Client Cache instance which boosts the performance.

There are multiple factors upon which the performance of InProc and OutProc mode is measured i.e., data availability, resource consumption, and speed.

Speed: Client Cache InProc mode is super-fast because it is like an object on your heap and it keeps things in a deserialized fashion, saving the cost of serialization/deserialization that you have to do for any OutProc or any remote access to the cache.

The operational flow of Client Cache

Client Cache is closer to the application layer, and Client Cache is the subset of the clustered cache. So, all the operations occur in a distributed manner.

Data is returned to L1 Cache before returning to the application so that the next time when same data is requested it is directly provided from L1 Cache.

Non-key-based read and write operations are only performed at the L2 Cache because the L1 Cache holds the subset of the L2 Cache. 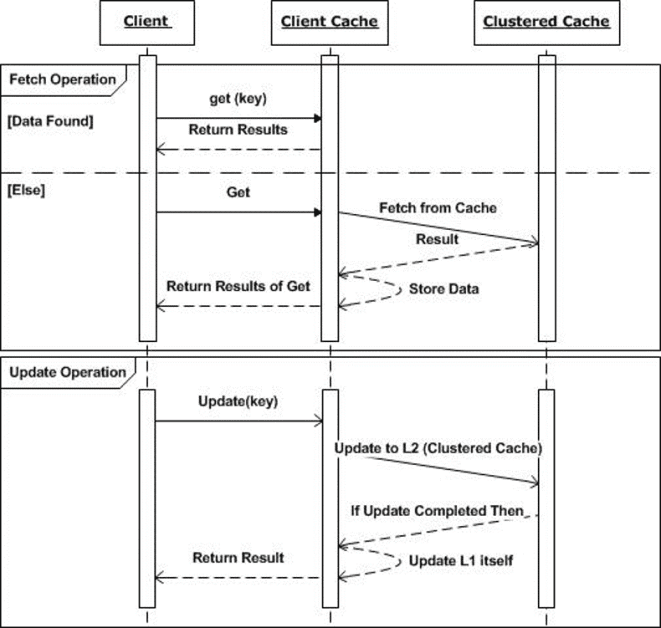 Other Client Cache instances are updated through a background data synchronization mechanism.

While being local to your application, a Client Cache is not stand-alone. Instead, it is always synchronized with the clustered cache. This ensures that data in the Client Cache is never stale.

Optimistic mode is the default mode for data synchronization in NCache. Synchronization takes place in the background and when an application requests the data, it is returned to the application from the Client Cache.

Applications that are more sensitive and require fresh data use pessimistic mode for data synchronization. when an application requests the data, L1 Cache verifies the version with the L2 Cache and provides the updated data.

NCache allows you to take advantage of Client Cache with a distributed cache. The best part of using Client Cache is that there is no programming done at the user end. It is a simple configuration setting, and the Client Cache is automatically plugged in. Client Cache boosts performance in many folds for applications that perform more reads than writes. So, download a fully working 60-day trial of NCache Enterprise and try it out for yourself.