Diving Deeper into Encryption in NCache

NCache provides support for the AES encryption algorithm which is an official part of Federal Information Processing Standard (FIPS). The AES algorithm processes data chunks of 128 bits, using encryption keys of lengths 128, 192, and 256 bits. The supported flavors of AES are listed below.

You can read the RFC specification document for AES and AES-FIPS at the Internet Engineering Task Force (IETF) website.

NCache also provides support for the 3DES encryption protocol, which processes data key lengths of 128 and 192 bits. You can read the RFC specification document for 3DES at the Internet Engineering Task Force (IETF) website. The following algorithms are supported for NCache encryption:

Where does Encryption Occur?

NCache data encryption and decryption occur inside the NCache client application process. This means that all data traveling over the network between your application and the cache cluster is already encrypted. Similarly, only encrypted data is stored in the cache store. 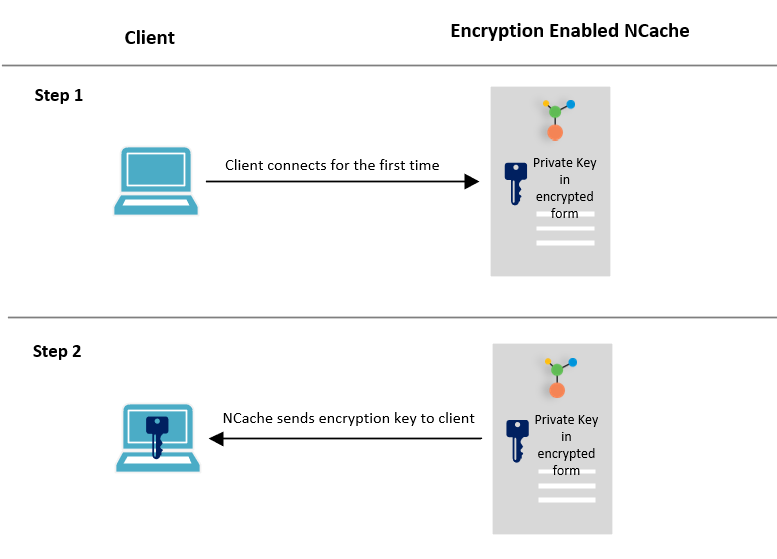 If you’re handling sensitive data in NCache, you can be rest assured that data is encrypted and secure from unwanted access at all stages of the data’s life.

Data from Client to Server

Once the encrypted key resides at the client end in memory, any data that has to be sent to the cache is encrypted using the key. Generally, the data is first serialized, encrypted and compressed (if compression is enabled). Encryption of data at the client end before being transmitted means that the data is encrypted in transit. This ensures anyone eavesdropping on this connection will not be able to fetch any sensitive data.

Once the data is added to cache, the data is stored in its encrypted form so it is secure even at the cache end.

Within the cache cluster, data is encrypted during server-to-server state transfer or replication. So, it is still encrypted in-transit.

Figure 2 shows how data is encrypted from client to server::

The encryption/decryption behavior for NCache client API is handled automatically while ensuring all data in transit is encrypted and is only decrypted where it needs to be processed.

Cache items are added with metadata like Groups, Tags, and Named tags. These include additional information for the cache item that defines how data is indexed.

As with client-side features, the encryption/decryption mechanism for NCache server-side features is handled automatically on the nature of the feature:

You can enable encryption through NCache Management tools without any programming effort on your part. Encryption has to be enabled on cache start so that all data is homogenously encrypted. You can learn more about this in our docs on Configuring Encryption.

Apart from encryption, NCache also provides secure communication through SSL/TLS 1.2. Moreover, it even ensures your cache environment is secure at cache API and node management level by providing Access Control Lists. You can read more about these features here:

It is no doubt that data is the new currency, and cybersecurity is gold. Hence, NCache recognizes the need to secure your data and provides a range of security features to warrant compliance with the latest algorithms. However, as encryption/decryption is a CPU intensive task, it must be used where explicitly needed as it impacts performance.